Magical papyri are good. I thik, better then medieval grimoires. Many of them are free on net.
I tried evocations according papyri and it is quite safe.
Top ive been reading your blog, good stuff! you ever consider writing an article concerning the geometric symbols related to the sephiroth, and the symbols created by planets orbits, and how they relate? i would also be really interested in your take on the differences between the western and eastern heart centers. they're both considered the balance point, respectively, and they are kind of similar (i have done the middle pillar quite a bit in the past and lately ive been working with the chakras (i dont consider them to be the same things, although a lot of people do)) but the heart chakra lacks the "fire" that is so central to the western system.from reading your blog it seems you have decent amount of experience with both, and i would like to hear your view on it.

To be perfectly honest, my path took a huge deviation a few years back to a more witchcraft/shamanic and spirit based practice (focusing on the PGM). My interest in the highly intellectualized Kabbalistic models and such has thus waned significantly.

Regarding the sefirot and chakras, I agree with you. I don’t think they are the same thing, though there are undoubtedly many similarities primarily when used to identify subtle energy centers in the human body.The Macroanthropos ritual was my personal attempt at creating a unified system building from the Middle Pillar rite and incorporating the Ari and Gra trees which I found to be far more cohesive than the tree models popularized in the Western Lodge traditions. It worked quite well given geometry of the trees in relation to the proportions of the human body. When the horizontal (mother) paths are taken into consideration with the sefirot the tree produces a very clear vertical system of 7 subtle centers along the central channel of the body.

The heart chakra and Fire element is an interesting and I suspect rather polarizing topic. In traditional Tantra it is more commonly attributed to the element of Air (or rather Breath), Fire being in the Solar-Plexus. This is due the concept of purifying the elements and the directionality of the kundalini from base up (verses the Western directionality of top-down). Thus the four elements are purified from the most dense in the Muladhara-chakra to the least dense in the Anahata-chakra in the order of Earth-Water-Fire-Air/Breath.

This is why I developed my version of the Middle pillar that incorporates the horizontal paths. Doing so, enabled me to keep the tantric attribution of the chakras mapped onto the body while also incorporating the sefirot AND the mother letters. If you look at how I mapped the trees (based on the proportions of the human body), you will find that Tiferet actually corresponds to the Solar-Plexus and it is the horizontal Aleph path (Ruach/Air/Spirit/Breath) that aligns with the heart. 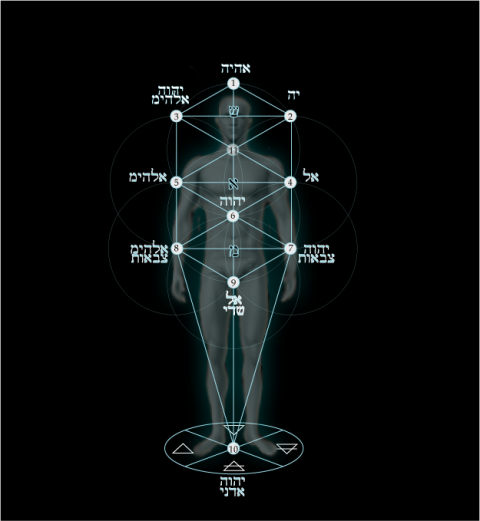 I don’t think there is a way to reconcile the geometries of the planets in their sidereal and synodic cycles with any of the other traditional planetary orders. I think this is because we are looking at entirely different manifestations of the planetary principles. The order generally accepted in Kabbalah and the one common in the Western magical traditions is the Chaldean order which is a measure of distance (identified as the “Seven-Zoned” order in PGM XIII.). The weekly (or “Greek" order in the PGM) is a measure of time. The planetary geometries are not constant measures, but rather describe a ratio of positions over time. Each system thus provides a slightly different perspective from which to interact with the planetary energies and spirits.

Trying to find an explanation of how these all fit together is a deep rabbit hole that will only make sense within a given framework and perspective. It can be a trying intellectual and meditative exercise, and can definitely lead to new self-understandings of universal harmonies and principles. Your explanation is quite interesting and if it works for you then go with it and see where it leads.

Lol…man you are digging deep into the blog. I had completely forgotten about Opus Sol. This was a practice that a close friend and I worked on 6 or 7 years ago. We used a password to keep our comments private. I'm pretty sure we deleted everything that was there other than a few diagrams and basic instructions. The meditation was a simplified form of the 231 paths or “gates” of the Sefer Yetzirah, but instead of using the 22 Hebrew letters, it used the 12 constellations of the zodiac resulting in 66 paths.
----------γνῶθι σεαυτόν----------
Top
Post Reply
15 posts